skip to main | skip to sidebar

Don't call it a comeback, we been here for years... 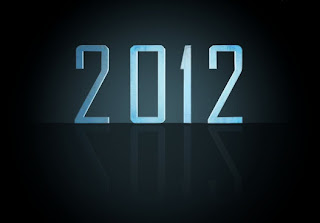 Shut the front door. We're back.

Let's face it. Our last post (excellent deals at your local Springville Reams) was epic. What a cliff hanger. As we knew it would be years before we could compete with that, we moved on to more modern, spitfire ways of sharing our lives like Facebook and Pintrest to bridge the gap. That being said, with several years behind us, it's go time on a new post. Buh-bam 2012.

So, here we are. I believe the infamous words of LL Cool J's early 90's rap hit "Mama Said Knock You Out" (buy now for just $.99) are in order for this occasion:

Don't call it a comeback
I been here for years
Rockin my peers and puttin suckas in fear
Makin the tears rain down like a MON-soon
Listen to the bass go BOOM
Explosion, overpowerin
Over the competition, I'm towerin
Wreckin shop, when I drop these lyrics that'll make you call the cops
Don't you dare stare, you betta move
Don't ever compare
Me to the rest that'll all get sliced and diced
Competition's payin the price

Now, you may be asking yourself, "Why didn't he just stop quoting that after the second line? Wasn't that excessive?"

I'd like to answer that question with a question of my own, "Is this love, that I'm feeling? Is this the love, that I've been searching for? Is this love, or am I dreaming? This must be love, 'cuz it's really got a hold on me-ee-ee." (buy now for just $.99)

So, now that is out of the way, let's get serious. {pause for effect}

Great. That felt good. Issues are being dealt with. Positive stuff here people.

Sheesh. Now I remember why I stopped writing on this thing. I don't have anything interesting to say. I guess I should at least give a shout out to my buddy Robert Vila. Still funny, after all these years (buy now for just $.99).

Come party with the Matt until 4:14 PM 2 wise cracks

Come party with the Steff until 9:23 PM 4 wise cracks

Anyone who knows us, knows we like a good deal. We're drawn to a good deal like a fly is drawn to poop. So, as you could guess, we love garage sales, coupons, and our favorite: Craigslist.

About a month ago, Charlie's therapist came to our house to check out our setup. As we discussed some of our concerns and challenges with Charlie, she made some suggestions for toys/products that could benefit Charlie and help us survive. One thing she suggested is some sort of playset/swingset/tiered structure for him to climb up and down on. So we've been watching KSL and Craigslist, getting frustrated with not finding something that worked for us.

So I decided to take matters into my own hands. I posted a 'wanted ad' on Craigslist that basically said, "If you have a swingset that you'd like to get rid of, I'd be happy to buy it and pick it up from you." I was hoping to get ahead of the game.

I had one response. I thought the response and the chain that followed was worth posting. I hope you'll enjoy it.

First off, I must say that a swing set is a horrible toy for a child. I had a swing set as a kid, and broke three of my ribs and tore my ACL on it. My career in little league soccer was ruined. I recommend that you get your child a sandbox. I have an old sandbox that I am not using, and would be willing to sell to you for $300. It is an awesome sandbox. It is shaped like a turtle, and the lid is part of the turtle too. It comes with beautiful sand filled from a beach on Utah Lake. Let me know if you are interested.

I appreciate your deep concern for the welfare of my child. I also appreciate your willingness to share what must be deeply repressed experiences from your childhood. I'm truly sorry for the life altering events that took place in your youth. Those days just never come back to us.... I know.

I, as a lad, played soccer as well. I remember with every detail the championship game, the game tied with just moments to go, and me dribbling through defender after defender, breaking into the clear, one on one with the goalie. This was to be my moment in the spotlight. This was to make up for all the times the kids made fun of my holey jeans. As I approached the goal, setting myself up for the game winning shot, I tripped and fell. The kids laughed again, and again, and again. I'm pretty sure the last laugh was because I also peed my pants. Anyways, when I stood up and made my way off the field, the first thing I saw was a turtle sandbox. I'll always remember the disdain on that turtle's face.

So, while I appreciate the very generous offer of your turtle sandbox, I'm going to stick with a less arrogant occupation to engage my child in, like licking rocks... very humbling.

In addition, I'd also like to recommend a therapist that has helped me get past my pain throughout the years, Dr. Jellyfinger.

All the best in your healing,
Matt

Do you want to buy my sandbox or not? I didnt ask for a play by play of your youth. The swingset I had, had a faulty design and the swing came off while I was in the air, and I was sent flying into oncoming traffic. I am lucky to be alive. If you do not want your son mangled by a Dodge Caravan, then you should buy my sandbox instead. Sandboxes are 100% safe. I think a sandbox is much better than a swing set. Just some friendly advice.

Also, I hate your turtle sandbox. Don't threaten me with it again. I had a neighbor that was buried alive in a sandbox. Don't try to tell me they are 100% safe. You're wrong.... dead wrong.

You have to be a total idiot to die in a sandbox. I despise your swingset. Despise is a much stronger word than hate.

What am I supposed to say to that? Good form Robby. We could be friends. We think you're funny.

It's official...I don't have to pay any more preschool fees for at least another 5-10 years (if we ever have any more kids)! Yeah! Winston graduated from Smart Stuff Preschool with flying colors last Friday. We also got to meet the parents of the little girl he married on the swings while holding hands. We all got quite a kick out of their little preschool crush on each other. Hadley has been all the talk at our house for the last couple months. 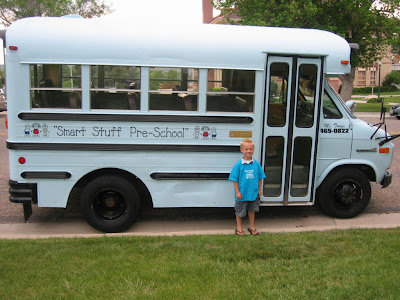 Winston in front of the Smart Stuff school bus. The kids went on many a fun field trip in this adventure machine. 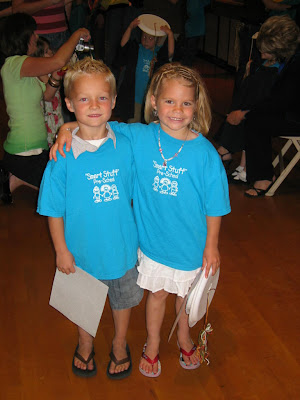 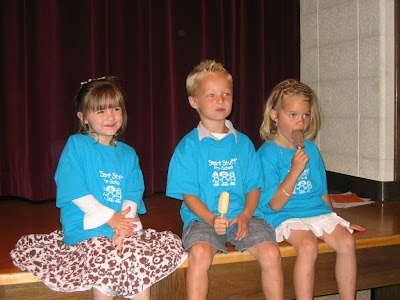 Winston with Hadley and Camille. 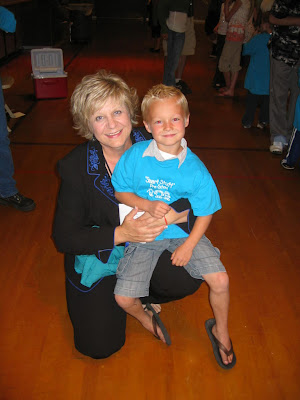 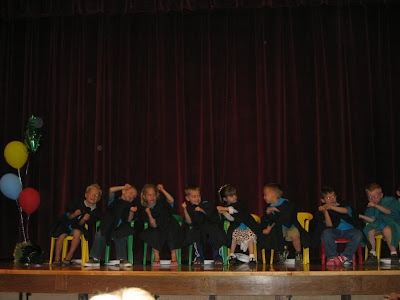 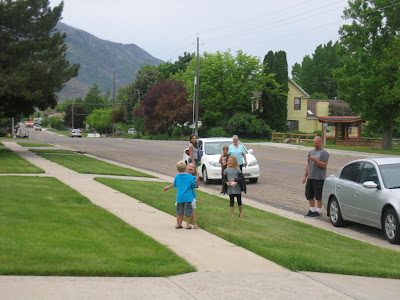 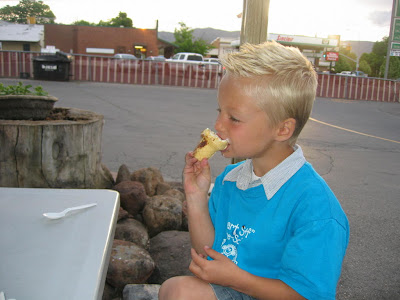 Eating a celabratory ice cream cone at the Daley Freeze

Congratulations buddy! We love you!

Come party with the Steff until 8:56 PM 7 wise cracks

Too good not to share... (Matt in a dance contest)

I love you hon... I hope we can still be friends after this. Matt actually won a sweet trophy in this dance contest on our cruise a couple years ago.

(Don't worry folks, this was in his pre-Bishop days) ;)

Come party with the Steff until 9:47 PM 13 wise cracks

To my anonymous "friend in the ward"...

I don't know if you read my blog but I just wanted to say thank you for the note. It really made my day... my whole week, actually. I won't go into details but it was just the thing I needed right now. It was also a great reminder to me to follow through when I have a prompting to do something like that because I know how much of a difference it made to me. Thanks so much! I don't know who you are but I know I think you are GREAT!

Come party with the Steff until 8:44 AM 0 wise cracks 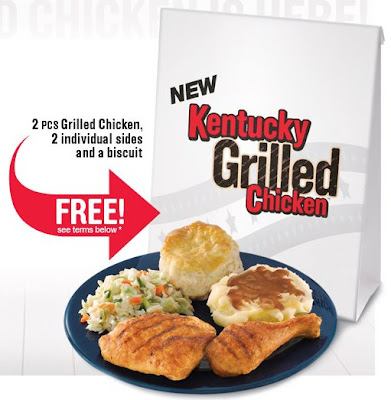 Print your coupon here for 2 pieces of their new grilled chicken with two sides and a biscuit. I think they only allow a certain number of coupons to be printed...so hurry fast. ;) Yum yum!

Come party with the Steff until 12:38 PM 7 wise cracks

For the Love of Charlie

This is how many friends we wish we had....

6 years later and we still got it!!

I will be doing my first Daring Bakers Challenge this month...wish me luck!! 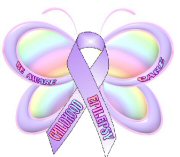